Posted by Sustainable Hayfield at 16:21 2 comments: 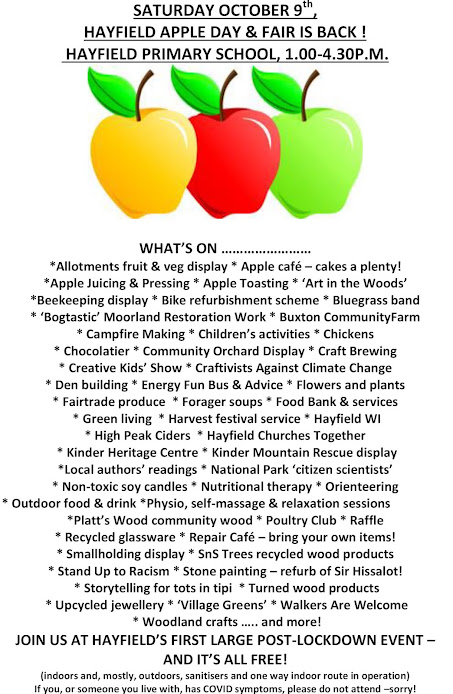 Posted by Sustainable Hayfield at 10:00 No comments:

By this email, we're advising you of our forthcoming AGM and an exciting presentation to follow.

We'll be holding our 2020-21AGM, regulations permitting, on Thursday September 16th, starting at 7.30p.m. It will be accessible by Zoom or Zoom-alike facilities. If the technology allows, we may also be able to have a face-to-face element to proceedings, based at The Royal Hotel.

Yes, we know….....AGMs aren’t especially exciting or full of drama –which is why we usually aim to complete our business in about 20 minutes, and move on to something with wider appeal, and this year is no exception! We’re delighted to confirm this year’s AGM will be followed by:

AN ILLUSTRATED PRESENTATION ON COP26

in which Kevin, a world-renowned authority on the climate and ecological emergency facing us all, and an inspiring speaker, will talk about what the science is now saying we need to do to halt climate change, and what we can expect from the UN COP (Conference of the Parties) 26 gathering in Glasgow, in November.

Kevin is Professor of Energy & Climate Change in the School of Mechanical, Aerospace and Civil Engineering at Manchester University, and is a former Director of the Tyndall Centre for Climate Change Research. An engineer by background, he has published research in Climate Policy, Royal Society journals, Nature and Science. He engages widely across all tiers of government; from reporting on aviation-related emissions to the EU Parliament, advising the Prime Minister's office on Carbon Trading and contributed to the development of the UK's Climate Change Act.

This COP26 gathering is seen by many experts as the ‘last real chance’ for nations to agree on measures to halt the risk of irreversible change which will create mass migrations of displaced peoples, sea leverl rises and inundations, and ever-increasing frequency of extreme weather events.

Kevin has spoken previously in Hayfield, to a ‘sell out’ audience and we expect similar this time around. So keep the date in your diary. We’ll supply more information when we have it.

But one last thing – if you’d like to join our Committee because of your passion and skills around living more responsibly, reply to this email supplying a few details and we’ll be in contact.

Posted by Sustainable Hayfield at 17:32 No comments:

Our winter newsletter is available to download here. For obvious reasons, we're light on 'events' but there's plenty of news to update you on. We hope you find the time to peruse its pages. And, if you've anything you'd like to see us look at, do get in contact.

Posted by Sustainable Hayfield at 08:59 No comments:

In the midst of the pandemic, many voices are arguing that we must learn lessons, seize opportunities and ‘build back’ our economy and society ‘better’ than it was previously, with its emphasis on conspicuous and often reckless consumption, waste and lack of thought for the future. And we are definitely amongst them. Even the government is using this language. But deeds are more important than airy words.

So we thought we’d just mention a few local options worth considering as you contemplate your shopping this season, and beyond.

We hope you find these ideas helpful.

Posted by Sustainable Hayfield at 13:29 No comments:

My friend John McCall, who has died aged 75 from cancer, was a leading architect who was committed to the green environment, social housing and civic provision. John designed pioneering low-energy and sustainable homes in north-west England.

He was also involved in a successful campaign to prevent slum clearance in Longsight, Manchester, and to save the homes instead. In Hayfield, High Peak, Derbyshire, he was centrally involved in refurbishing the Memorial Square, reviving a neglected central part of the village.

John was born in Glasgow, the only child of George McCall, a decorator, and Edith (nee Davis), a factory worker. The family moved to Hyde, Edith’s home town, while John was a baby. John attended Stockport school, a state grammar. He studied architecture at Liverpool University, gaining a first-class honours degree in 1969. He retained teaching and examining connections with the university up to his retirement.

John met Susan Hotchkiss, a student at Liverpool Art College, and they married in January 1971. Sue became an established artist. From 1973 to 1991 John was a key figure in Michael Hyde and Associates in Manchester. Between 1991 and his retirement in 2010 he was head of John McCall Architects, based in Liverpool and Hayfield.

In the 1970s John was involved in a campaign that prevented the demolition of many homes and communities in Longsight, as part of Manchester City Council’s slum clearance programme. As a key member of the Manchester and Salford Housing Action group, formed by radical architects and other professionals, he pioneered more democratic ways of working with residents.

They carried out surveys of targeted properties, costed the options and concluded that it would be preferable to save and improve the existing houses and preserve the strong sense of local community and identity than bulldoze the properties. They produced information for residents, including material in Urdu. They made their case to the slum clearance hearings and were successful. Seven out of the nine proposed slum-clearance areas in Manchester were saved and became general improvement areas.

In 1977 John and his colleagues, working under the auspices of the Help the Aged Housing Association, won a Civic Trust award for their provision of the first sheltered housing scheme in Norman’s Place, Altrincham.

In Hayfield, High Peak, he was centrally involved in environmental and civic projects, including the Sustainable Hayfield Energy Group, which secured funding to help villagers improve the energy efficiency of homes. The creation of an eco-friendly environment, including social housing and strong communities, underpinned John’s philosophy and practice.

John was a generous, caring and optimistic person with a passion for fairness and social justice. He was sociable, enjoyed the pub and music and had great joie de vivre. John played cricket, the drums in his own band and, unusually, supported both Liverpool and Manchester City. He actively promoted local fell-running and believed in wider access to the hills. He designed his boat, Muddy Waters, on which and he and Sue spent happy holidays.

John is survived by Sue, his children, Katy and Jim, and grandchildren, Arthur, Anna, Johnny, Etta and Rose.

Posted by Sustainable Hayfield at 15:39 No comments:

Scientific consensus tells us that uncontrollable changes to our planet will occur if we fail to keep global warming below 2°C.

To do that we need to cut greenhouse gas emissions by 80% before 2050.

30% of our emissions result from heating and lighting our homes.

10% result from our travel choices.

40% are generated by food production methods.